47% of developers say sinful project managers are their biggest problem

47% of developers say bad project managers are their biggest problem

This article was originally published on .cult by Hannah Augur. .cult is a Berlin-based community platform for developers. We write about all things career-related, make original documentaries and share heaps of other untold developer stories from around the world.
What’s the first thing that people think of when they hear the word ‘developer’? For many people, it’s probably ‘money’ or maybe companies like ‘Facebook’ or ‘Google’. However, these topics don’t really reflect the work that developers do or the ways in which they view their career or their life. In fact, while only 8% of developers in Europe want to work for a FAANG, 35% want to work in an industry that’s working towards a good cause.
We conducted a survey to find out what developers in Europe really care about. You can find the full report here, but below are some of the key findings about developers’ career ambitions.
26% of developers are driven by the desire for personal satisfaction and pride
How to build tech for the unconnected
2.9 billion people still don’t have internet access
A career is more than just the work you do for eightish hours a day, especially for developers. Careers in tech mean having to stay on top of new trends and regularly upskill or learn new languages. So what keeps developers going and striving, year after year? The number one reason is personal satisfaction and pride. On the other end of the spectrum, the least popular answer is to build a network or gain status. 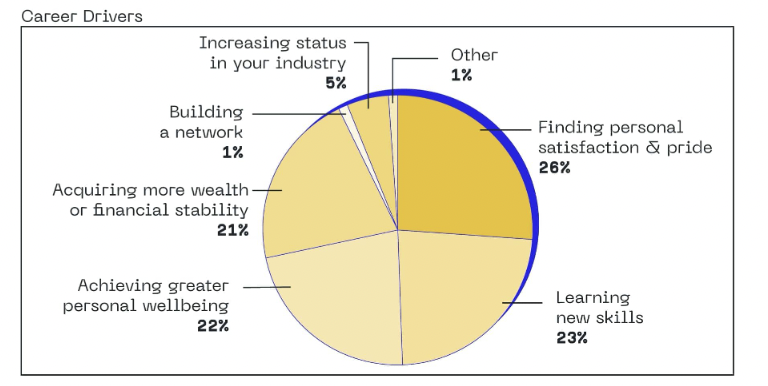 Source: Dev Career Ambitions Report
34% want to work in a startup
Where are developers most comfortable? TV tells us that it’s startups and, in fact, many developers agree. 34% of developers would prefer to work in a startup, primarily because there is less bureaucracy and they also feel more valued.
As developers are often the people making and managing the product itself, it makes sense that they would like to truly have a say in what that product looks like. Scaleups are also attractive to developers though the reasons are more varied. The biggest draw is simply that they typically have a better product. 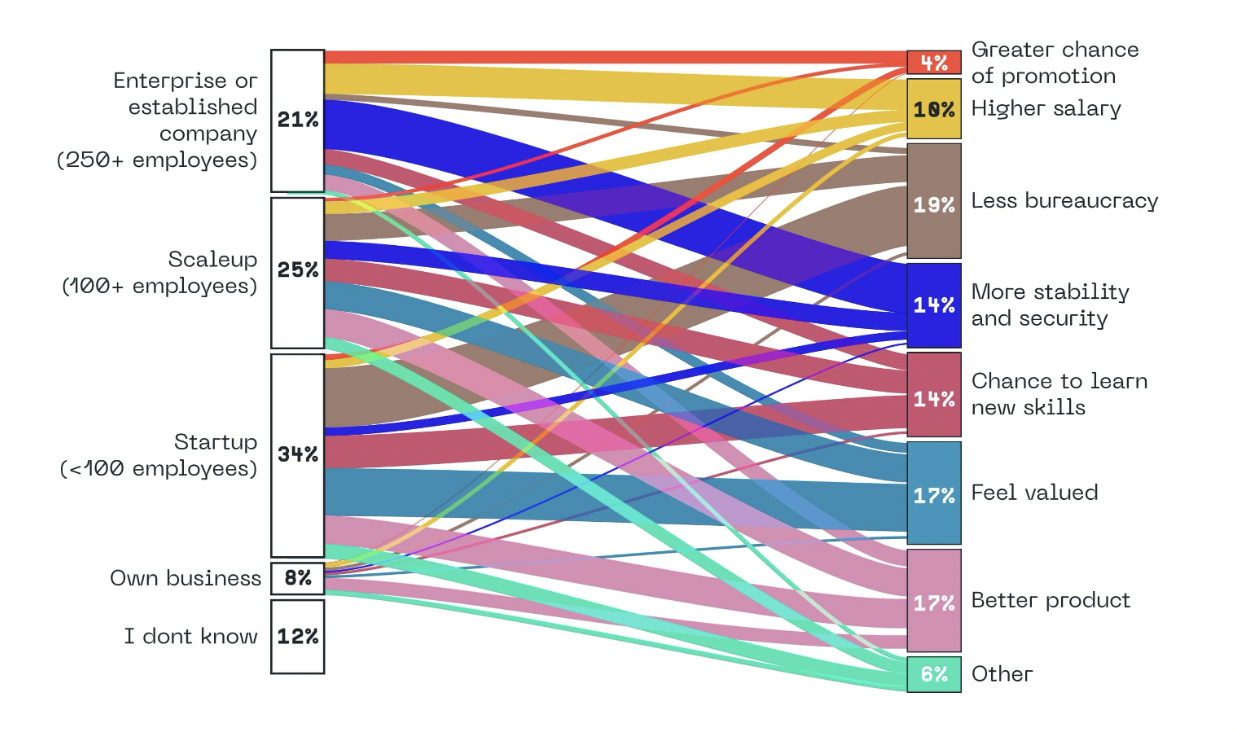 Source: Dev Career Ambitions Report
44% of developers say work-life balance is their most important criteria when considering a role
Remember that whole ‘regularly having to upskill and learn new languages’ topic? It seems that developers overlook topics like industry, diversity, and even salary in lieu of work-life balance and a good team/culture.
On top of this, among a list of key popular topics, 66% of developers agreed that work-life balance was a top-three priority for the developer community, followed by 53% who said mental health in general is key. These responses blew every other option out of the water. 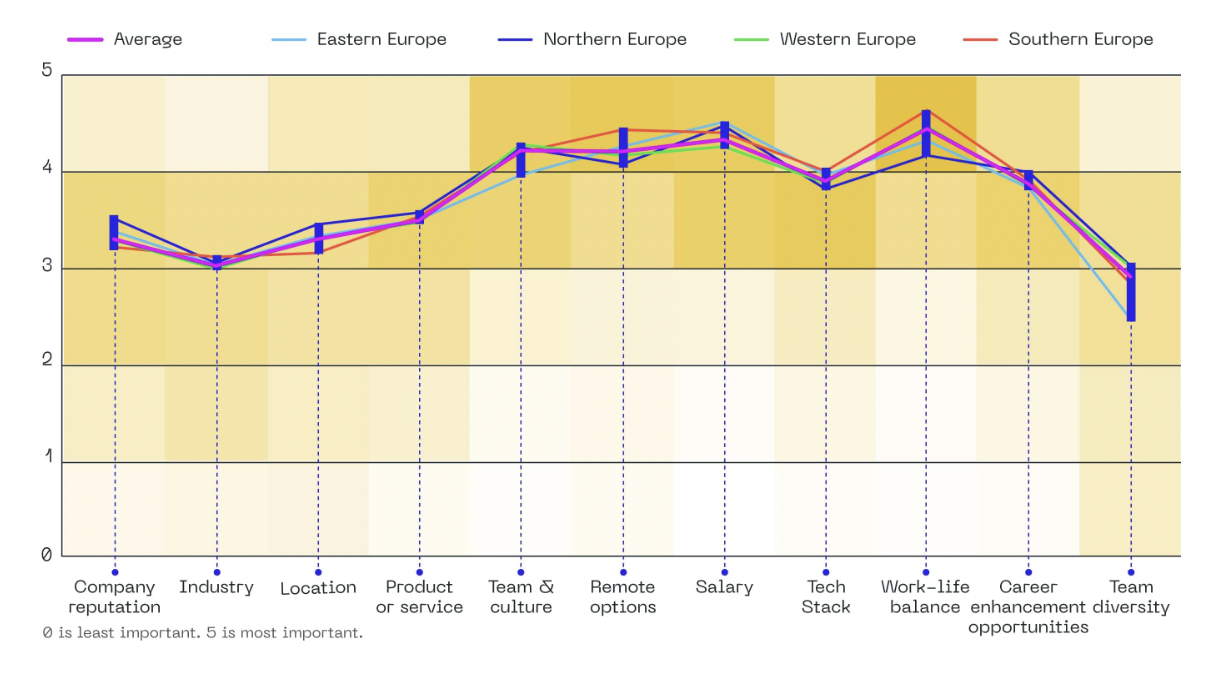 Source: Dev Career Ambitions Report
Only 7% of developers aspire to work for a FAANG
Working at FAANG is sure to make your parents say ‘oooh woooooooow, look at our kid, they’re so smart.’ In reality, far more developers aspire to work in an industry with a good cause. Interestingly, that’s 52% of women and 32% of men. For reference, the second most popular industry is ‘I don’t care.’
To team lead or not to team lead? 30% say ‘yes’
The most sought after roles for developers are team lead/middle management (30%) and individual contributor (26%). Importantly, 14% of current engineering leads and 26% of engineers with 9+ years of experience reported that they would like to be individual contributors.
While some developers did indicate a desire to found a company or join C-Level, the interest in remaining individual contributors or leads was undeniable across the board, including for those with years of experience. This is interesting when coupled with the fact that 26% are driven by personal satisfaction and pride and 95% would like to work on development-related side projects. 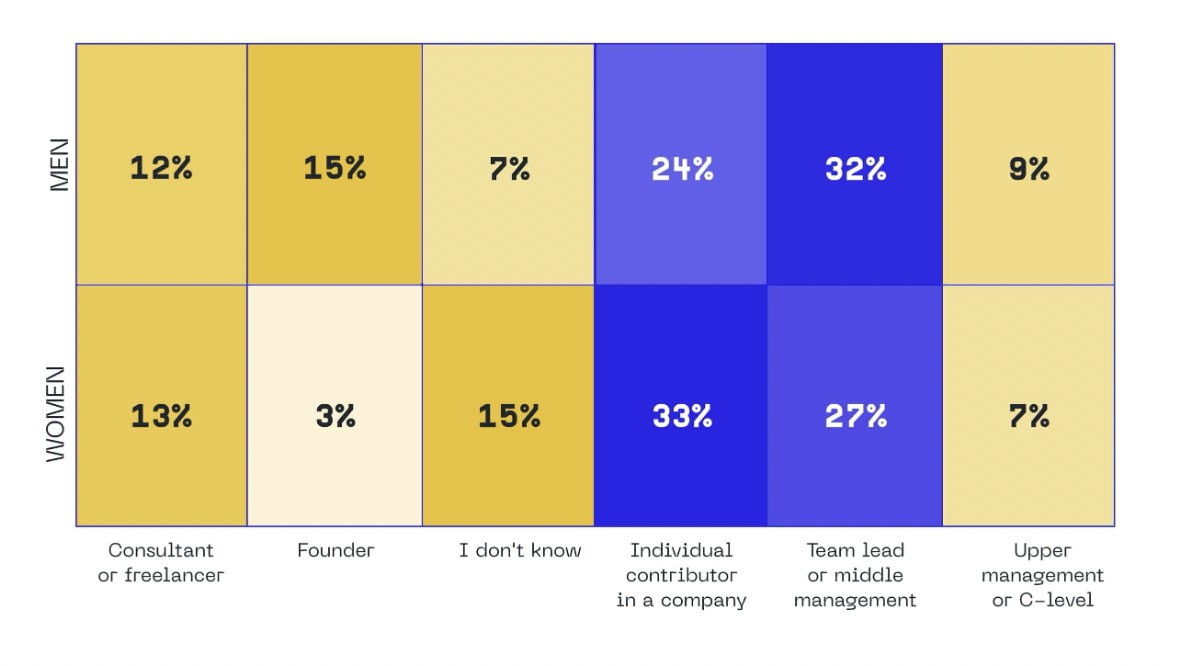 Source: Dev Career Ambitions Report
Charity Majors, cofounder and CTO of Honeycomb on the The Engineer/Manager Pendulum says:
It isn’t a promotion, so you don’t have any status to give up. Do it as long as it makes you happy, and the people around you happy. Then stop. Go back to building things. Wait til you get that itch again.
61% of developers would like to work on their negotiation & conflict resolution skills.
95% of developers aspire to have stronger soft skills…and the number one skill to work on is negotiation and conflict resolution, followed by public speaking and time management. Interestingly, the desire to work on time management does clearly decrease with years of experience. Furthermore, there are a number of notable differences between men and women. In particular, creativity seems to be a bigger topic for men, while assertiveness is a more important skill for women.
In conclusion, it’s clear that developers are often looking to make themselves proud. They want to learn and grow without tipping the work-life balance scale. To learn more about how they aspire to grow and what they expect from their work and community, check out the complete report. (It’s worth it.)
FYI, there are also reports specifically for DACH and the Netherlands on the way. tl;dr – the Netherlands likes therapists more than the rest of Europe. You can find them here when they launch.